The arts are vital to wellbeing, but where's the Government support?

This story was originally published by The Big Idea and Arts Regional Trust. 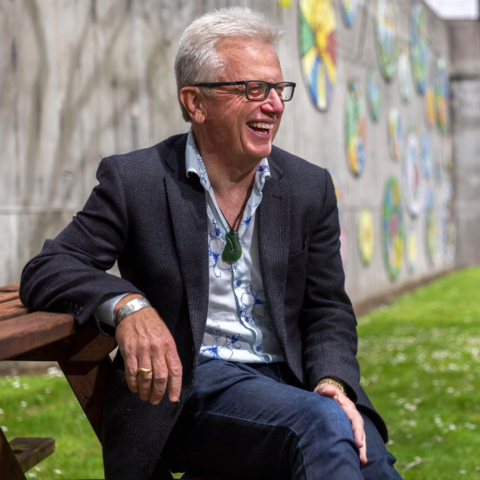 Professor Peter O’Connor is intent upon growing the connection between the arts and wellbeing in Aotearoa’s communities and schools. While he’s gaining a lot of support, the one thing still missing is government funding and leadership for those working in the sector.

An international expert in applied theatre and a long-time proponent of the role of the arts in healing after trauma, Professor O’Connor is based at the University of Auckland’s Faculty of Education and Social Work and also heads up the multi- and cross-disciplinary Creative Thinking Project.

The project has two main areas of interest it is exploring: How do we make schools more creative, and how do we research and understand the arts and wellbeing?

“We work largely through what we call applied projects where we make art in and with communities and research that as we do it,” Peter says.

Ability of the arts to heal

Peter’s work using theatre in prisons, psychiatric institutions, with the homeless and in earthquake zones has shown the arts’ ability to drive social cohesion, innovation and the possibilities of creativity for healing.

Most recently, he directed a performance at the Museum of Contemporary Arts in Los Angeles for arts organisations working with the city’s homeless on skid row.

No leadership from government

Peter is concerned that despite overwhelming national and international evidence to support the idea that the arts are vital to the wellbeing of individuals, education, communities, and countries, there seems to be little, if any, understanding of this in the Ministry of Education nor the Ministry of Culture and Heritage. Peter says there is no coherent strategy for funding the arts and wellbeing as part of a wider strategy to embed the arts across government policy.

The contribution the arts might make for health and wellbeing continues to be ignored. Peter expressed his extreme frustration and disappointment saying that those working in the sector feel the rhetoric of this government has not translated into something tangible.

Those working in the sector feel the rhetoric of this government has not translated into something tangible.

“Just in Auckland alone there are more than 100 individuals working in youth arts with the most vulnerable young people in the city and it’s all largely being done through piecemeal philanthropic grants. None of the extra $1 billion+ in support for mental health is earmarked to sustain and develop groups who support individuals and communities through the arts. It is a wasted opportunity to make a genuine difference.”

Peter has also long been an advocate for the power of arts in education, and this is one of the key focus areas for the Creative Thinking Project. He worked as the National Coordinator for Drama with the Ministry of Education overseeing the introduction of the arts curriculum when it was made compulsory in 2003. Helen Clarke, who had previously been a Minister of the Arts and was Prime Minister at that time, invested over $15 million into growing the arts in schools. During that time the Arts were the fastest growing subjects at senior secondary level and beginning to grow at primary level. And yet, now they have all but disappeared in New Zealand’s schools, in our university teacher education programmes and are under enormous threat within our universities.

Peter believes that the Ministry of Education has no idea or interest in the arts and what they could mean to us as individuals and as a nation. The focus has turned away onto STEM subjects, yet international evidence is crystal clear on the value of the arts in education. Schools are less creative, less energised by the joy of young children exploring the world through their art making than they have been for generations. Peter expressed concern that there are no directives or plans for changing that in any meaningful way.

“With a lack of investment in the arts and wellbeing we are losing the potential for the arts to make the kinder, more empathetic and creative country we need to flourish.”

“With a lack of investment in the arts and wellbeing we are losing the potential for the arts to make the kinder, more empathetic and creative country we need to flourish.”

New home for creativity and hope

Peter’s passion for the arts in society and education has also been the driving force behind the establishment of a new Research Centre into the power and possibility of the arts at the University of Auckland that will be launched in 2020. The University of Auckland has received a significant amount of philanthropic funding for the Centre and Peter will be the Director.

This follows the launch of Te Ora Auaha: Creative Wellbeing Alliance Aotearoa earlier this year which aims to focus on ways to harness the power of the creative arts for individual and social wellbeing. The Creative Thinking Project currently hosts the network of hundreds of people and groups using the arts in the health, education, social and creative sectors. The network was established because artists who work in this area are often siloed and lack visibility at both local and national levels of policy making.

“The Creative Wellbeing Alliance brings together over 200 artists and health professionals under the same umbrella to work on ways we can use the arts to make healthier people and to have healthier communities,” Peter says.